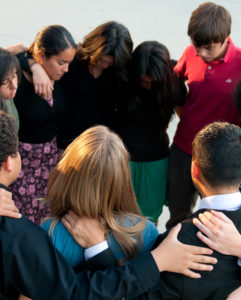 Herb Armentrout: One of the reasons it’s so critical that we’re have this, that we’re worshiping in our heart. I hope I didn’t communicate that we’re approaching music in a slipshod fashion because we’re all about doing things with excellence. But if there’s not heart engagement, if there’s not an expression of praise that’s visible outside of ourselves, if the people who watch us on Livestream or come to our worship services and who are lost and looking for hope see no difference in our faces, our worship expression. They’re saying, “I don’t need that. I already have that.”

So if it’s not happening inside, we can’t express it outwardly. So we’re constantly going back to the core. Why are we standing in front of our people? And if we are standing up there, we’ve got to evidence a life change, because if we don’t the music means nothing. It’s a repetition of notes, and rhythms, and words that is disconnected.

Dwayne Moore: Let me jump track a little bit, and I’ll just bring in PG from India just a little bit into the conversation. PG is here with us tonight. And it’s 6:30 in the morning for him or whatever time it is now, but he’s very faithful to be here every week, as is our other folks that get up in the middle of the night from other countries. But PG is in a church that doesn’t have an actual worship team that leads. If I’m understanding correctly, people just start singing within the congregation. Isn’t that basically how it works, PG? So it’s easy for a guy like PG to go, how does this apply to me? I don’t have a team. Now he actually does. He has an amazing band that plays at youth events and other things, but I mean with that church setting, PG doesn’t really have a team. I would say how do you apply this to your church in general? How do you, from the platform or how would you encourage a church to grow spiritually through what you’re doing, Herb? Not just your team so to speak in rehearsal setting but on Sunday mornings?

Herb Armentrout: Well in cases, we remind folks, we talk about that text. We don’t, it’s not the same level. We just, we talk about our expression in worship, particularly when we read scripture. We talk about how God’s word is sharper than a two-edge sword and it is vital and dynamic. So we don’t read it pedantically. We, in fact, sometimes we’ll just stop reading and we’ll say, we’re not, this is not what God desires is the way we’re reading this right now. We don’t ever do that in an ugly or critical way, but we really encourage folks to participate.

So whether you raised your hands or whether your shouted or whatever your expression of worship, that’s great. But it truly is born out, and so we try and connect that. Then we encourage folks to, we talked about worship being a celebration of God’s mighty acts.

I think just slipping things in and really trying to keep the congregation involved in that. Congregational involvement is huge. We try to plan in such a way that people can engage and feel comfortable because if it’s above, if it’s the level of musically range or rhythmic difficulty that would prohibit their involved them, then we’ve kind of cut them out of it. All those things are kind of a part of maybe helping our folks engage.

I had an opportunity early on in my ministry, working with an organist. She was definitely right in the top of the team. This was my first church out of seminary. This woman was so hateful to me and she had been there a long time before I came and she was determined to last, to outlast me. So I didn’t use the organ every … I’m going to kind of go around a little bit to describe what God taught me and maybe I could just share with you.

If she didn’t get to play on everything, she was upset with me. She would scowl at me from the organ bench. Anyway, it was just a difficult situation, and it kind of peaked one Sunday afternoon when she and her husband stood in the hall and shouted at me. The thing that God impressed upon me in regard to the answer to your question, is that people act the way they do for a reason.

What God quickly taught me, or it wasn’t even … It was just a realization, I think that came, just through reading God’s word. That is that there was a great deal of pain in her heart. So understanding that the pain is what she was responding to, and I was the recipient of all of that angst, was that if I could, if God would empower me, and he did to respond every single time with respect and grace to her, that I would be able to minister to her effectively. Because that remained my goal, was ministry to her and allow God to flow through me in grace. It’s not easy.

I would just say it’s a constantly coming, constant coming back to the Lord. It’d difficult because in our churches, and with our teams, the thing that makes us the best minister is the sensitivity to the needs of other people. It also opens us up. It makes us vulnerable to the darts that people throw at us. Many times those are hurled at us in our very most vulnerable times, pre- or post-worship service. Or maybe at the end of a long rehearsal.

I would say a continual reliance on God’s grace, continual remembrance that we are absolutely all depraved and stinkers, and offering that same grace to them. One thing that I think has also helped us to be intentional about loving people who are socially peripheral or awkward or taking steps to love and engage them allows a lot of folks in the choir to know it doesn’t matter who they are or how they act. We’re a family. Because that sets the tone. Because if other people see us respond in kind to folks who are hateful to us, then they don’t have a prayer in terms of being accepted by the balance of the team.

I think not avoiding time alone, because that was one of the things with some of these folks over the years was to sit down with them. Instead of just skirt the issue or choose another hallway in the church when I see them coming, is to invite them to come sit down with me. So they know that I love them.

And, if I can discover the need, whatever it is that’s emotional or whatever, really try and minister and love them in the middle of that. Not easy.

Dwayne Moore: No it’s not easy but it’s so important.