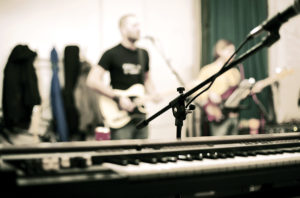 Hello everyone. Welcome to the Worship Q&A podcast. My name is Dwayne Moore. Each week we try to answer questions that worship leaders are asking.

Today our topic is how to challenge our worship team to grow spiritually during rehearsals. We have a special guest back with us today. His name is Herb Armentrout. Herb is the worship pastor at Broadmoor Baptist Church in Shreveport, Louisiana. He has become one of our dear friends and wonderful supporters of Next Level Worship. He, in fact, is one of our team members, and he uses our materials with his team, with his people that he mentors, so we invited Herb to come on as a guest with our coaching program with our coaching students just a few weeks ago. What you’re going to hear today is an excerpt from that coaching session. You’re going to love what Herb says. He’s so full of wonderful ideas, practical suggestions you don’t want to miss.

Before we start that excerpt, I want to put in a plug for our upcoming Worship Leader Coaching. You can join us for the next opportunity for coaching, which begins in September. Sign up at nextlevelworship.com, then click on the training tab and you can find out more information. Also, you’re going to want to come to our Worship Leader Intensive in October in Louisville. It’s going to be awesome, and we are so excited about the many people that are coming from different states to experience a powerful week together of growing and evaluating where we are and where God wants us to go in our ministries. So please go to our website, nextlevelworship.com. Click on the training tab, and you can see these different opportunities for growth.

And of course, there’s also our ReFOCUS Conference, which is in February in Pigeon Forge, Tennessee. This year we have Laura Story, Tim Timmons, Dr. Vernon Whaley. I’ll be there speaking. It’s going to be incredible time. Don’t miss it. You can go to our website, find out about all of these opportunities.

With no further ado, here is Herb Armentrout talking about challenging our worship team and choir to grow spiritually through rehearsals.

Continual Worship
Herb: We remind folks regularly that Sunday worship is to be a celebration of God’s mighty works during the entire week. It’s not a once a week fix. And that continual repetition of just this idea…

Dwayne: Wow. Say that again. So you encourage your folks to understand the continual, that it’s continual in the praise.

Herb: Right. This is not … Sundays, or whenever your worship service, is not a one week fix, and so that is critical for us, and we … I will say too that we regularly talk about dangerous text, dangerous text, and I’ll often stop in the middle of the song that declares our allegiance to the Father, or desire to walk in His will, and just stop in the middle of the song and say, “Do you really know what you just …”

Dwayne: I love it. Yeah.

Herb: “This is what you just said.” And the Father’s here, and he heard everything you just said. So take a step back. And if you don’t mean it, don’t sing it. Just sit there till we get to the next anthem. If you do mean it, sing it like crazy or play it like crazy. So, we’re focused big time on the text of the songs, and we encourage that also in Praise band rehearsal and orchestra rehearsal, because a lot of times, as you’re going through chord charts or whatever, maybe you’re not as connected to the text, so we take time to talk through those texts and encourage all the groups to use those in their personal worship. And there’s something happens, too, if you’re practicing on your own for Sunday, maybe you focused on a song and you just sing it acapella or just play it to Lord in your personal worship time. Man, when you get to worship on Sunday, it’s full on. Then it’s just, it’s brimming over because you have spent time in the Lord’s presence.

Changing the Culture
Dwayne: Hey, I have a question. I know these other guys probably have some questions for you too. Man, you’ve been there for several years, think you said 19 years. So now it’s ingrained in the culture. Everyone expects you to take time to go for the text. You know, they’ve learned, they know. That’s what we’re going to do when we come to our rehearsal at Broadmoor Church, we’re going to take time to look at the text. But I know when I went to Louisville, it took a while for them to change from the culture just running and gunning, running in there and rehearsing and just getting the chord chart rights and then leaving. We hear all this and we want to jump out there and do it tomorrow.

How long did it take you? I mean, I know it’s been a while now, but you may remember. I mean, did it take … Did you walk in and like six months turned this thing around, or was it already like that when you got there? Because these are things that all of us wish we were doing more of, but the reality is, we’re probably not doing them all, and how long does it take for one to really ingrain some of these things into your people?

Herb: I would say that the things I’m describing are done in small doses, and they’re woven into the fabric of the rehearsal. These are not… It’s not like, oh, now this is what we’re doing now. A lot of times we’ll often start with prayer, but these other things are just kind of woven in, and not all of it are prescribed, if that makes sense. And I think that kind of variety and the way that we do these things brings about an openness.

The worship choir is hour and a half. I don’t direct the orchestra, but they do meet for about the same period of time, and occasion I’d go in there. High school choir is an hour and 15 minutes, and then I work with some other groups, singing ministers and stuff. So I guess the shortest period of time I have with any group is probably an hour, something like that. So it’s not very long, but you still got to get through the music, and I think that’s the … at the heart of the issue is the understanding that music ministry is not about music first, it’s about people. So if your quest is to make perfect music, you’re going to leave people in the dust.

We do occasional book studies, and these have been great. We’ve used certainly Pure Praise. Rory Noland’s … I know, I’m sure you’ve talked about this, Dwayne. Rory Noland’s book on Heart of the Artist. And I would say a brand new book that has just … I’m just starting in it, and I’m pretty sure we’re going to do it at some point, is called How to Ruin Your Life, and it’s by Eric Geiger. It’s just … I don’t know if any of you guys have heard of this.

Well, it’s a story, essentially, of King David, and it’s an implosion of integrity and his life, but man, you talk about direct to us, primarily leaders, whether it’s worship leaders and pastors or leaders in any area of business or whatever, even a family leader. It just talks a lot about setting up guidelines in your life for everything, not just one particular section, but how to avoid this implosion that seems to be sometimes an epidemic proportion of … in this epidemic of loss of integrity.

We do a group prayer time. Different ways that we pray, we have prayer partners for short periods of time, and we’ll just assign those because we want folks to get to know other people. Always men with men and women with women. We’ve also done something kind of crazy with secret partners where we will assign folks someone there to pray for, but not tell them who it is, and then they will also bring a gift every Wednesday for a month to this, and just put it on their chair. Then at the end they meet each other. The only danger is if you got some losers who don’t buy in, and nobody gets a gift. You know what I mean? If you’ve got somebody just doesn’t buy in, it’s kind of tough.

Structuring Care
Then in our high school choir, we have teams where the kids rotate through their sponsor teams. We have care group leaders in all of these. And I think maybe to answer that question regarding vestment is, our care group leaders and all of our teams really carry out a good bit of spiritual and emotional care because it’s just the way families work. A large family, you’ve got people assigned to care for other people, and then that shepherding is shared, so you’re developing within these folks who are already committed. You’re sharing leadership responsibility and they’re growing.

One of the things that we do in terms of just celebrating is recognizing, in our rehearsals and the time that we have together, is that God is at work, and we do brief testimonies on our choir tours, and also [inaudible 00:10:37] choir where we … It starts with, “I saw God, I saw God doing this.” So we celebrate that, and then finally, in this section, I would … God stories. We have people submit God stories on the memo, on their phone. “My name is,” and it’s 90 seconds long, “and this is how I saw God intervene in this situation.” They send it in, then we can play it back with just a picture of theirs. We’ve done that at worship. So for those folks who are paralyzed by having a camera on them, they’ll talk and we give them a little outline. This is the problem, this is God’s intervention. and this is how He’s bringing glory to Himself now.

Dwayne: Well, once again, Herb Armentrout has challenged us and helped us with some wonderful ideas, incredible ideas, of how to grow our group spiritually. We’re going to have Herb on again with our podcasts, so you don’t want to miss the next episode of the Worship Q&A podcast.

If you have a question that you would like us to answer, please send us your question at office@nextlevelworship.com. I hope you have a wonderful week in your church and within your family. Thanks.