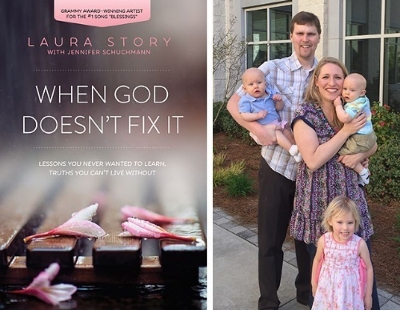 Our friend and worship artist, Laura Story, sent us this excerpt from her amazing new book, When God Doesn’t Fix It. Enjoy!

When Martin and I walked through his medical trials, we saw a lot of things die. Our vision for our future. Our dreams for each other. Our idea of a perfect family. Sometimes they died all at once; other times, our dreams slowly withered away. When they did, I thought they were gone forever. But occasionally God allows a dream to die so that we can see his power greatly displayed.

In chapter 11 of the Gospel of John, Jesus was traveling with his disciples when he received a message from his friends, Martha and Mary of Bethany, that their brother, Lazarus, was very sick. Though they don’t say so directly, the implication from the women was that they wanted Jesus to come to Bethany and heal him. But Jesus stays where he is. It takes him four days to return to Bethany.

When he arrives he hears the bad news.

When Mary reached the place where Jesus was and saw him,

she fell at his feet and said, “Lord, if you had been here, my

They were upset that Jesus hadn’t fixed Lazarus. Jesus understood their disappointment. But these sisters were his friends and not even they fully understood who he was. He was about to show them that death has no power over him.

Jesus is the resurrection and the life. He is the enemy of death who alone can defeat it.He resurrects dead things and brings them back to life. He doesn’t need help or for Mary and Martha to tell him he is too late to raise Lazarus from the dead. In front of the gathered crowd:

Then Jesus said, “Did I not tell you that if you believe, you will

He prayed, thanking God for hearing him, and then commanded Lazarus to come out of the grave. To the surprise of the sisters and the crowd, Lazarus shuffles out still tightly wrapped in his burial clothes. Jesus did his greatest miracle yet, on his own timetable. Though Mary and Martha had urged him to come sooner and may have felt unloved when he didn’t come quickly, those weren’t his concerns. Their urgency didn’t stir him. And his love for them never changed. He alone could see the future and know the perfect time and the perfect way to answer their prayers.

So what was the sisters’ role in this story?

What is our role?

Believe, and be witnesses to the glory of God.

This is also what Jesus wanted for the crowd that day. He waited four days, so that all of the Jewish mourners who were gathered would know that Lazarus was truly dead. This wasn’t some kind of trick. Lazarus wasn’t napping. There was no spirit or soul circling his body, waiting to reenter it. Lazarus was four days dead–stinkin’ dead.

And through the power given to him by the Father, Jesus raised Lazarus from the dead.

The crowd was there to believe and witness God’s glory.

Jesus doesn’t raise everyone from the dead. He raises believers from the dead to spend eternity in heaven with him and God the Father.

And sometimes, like the crowd gathered that day in Bethany, we can be surprised by seeing Jesus raise things we thought were already dead. This is what Abraham experienced with Isaac. He thought God was calling him to sacrifice his son, but at the last minute, God substituted a ram for the offering.

Is there something you’ve let go of because you couldn’t make it happen? Do you believe that if you offered it to God he could raise it or make it happen?

Jesus takes dead things and revives them. He is the life. He is the resurrection. And it is through your belief in him that you will see the glory of God, just like Martha and Mary did. Jesus has the power to resurrect the things we’ve let die–our hope, our healing, our family, our mind, and our body. And though he doesn’t promise to restore everything until we enter Restoration, occasionally we get a glimpse of things we let die being revived. And in that moment we see the glory of God.

I know this, because I have seen him do it.

There were so many things Martin and I had to let die during our brokenness. Martin’s desire for a job. My hope to have kids and stay home with them. Or the simple prayer that our path could be easier.

Sometimes we had to let these things die more than once.

Like Mary and Martha, I wanted things to happen my way and in my time. But when I stayed focused on my short-sighted view of the situation, and absorbed by my own grief and loss, I missed seeing Jesus, the resurrection, and the life who was standing with me the whole time. He had given me so much, including this wonderful ministry. So I let go of my dreams again, because I knew I wasn’t the one who could fulfill them, and I didn’t want to spend another minute chasing dead dreams when Jesus offered me eternal life.

Taken from When God Doesn’t Fix It by Laura Story Copyright © 2015 by Laura Story Elvington. Used by permission of W Publishing Group. www.thomasnelson.com